Ralph Blumenthal on “Crash! The Stock Market Collapse of 1929 and the Rise of Fake Money (Scrip)” 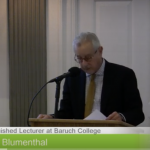 Ninety years to the day after Black Tuesday ushered in the Great Depression, former New York Times reporter Ralph Blumenthal, a Distinguished Lecturer at Baruch College of the City University of New York, talks about how cash-starved municipalities issued their own bills and coins, with examples from the Baruch Archives historic collections.

April 28, 2019
The Roosevelt Library and the Baruch College Newman Library of the City University of New York will commemorate the 80th anniversary of FDR’s 1939 reorganization of the executive branch. The symposium, “Making Democracy Work: FDR’s Bitter Struggle to Modernize the Presidency” is based on Baruch’s historic collection of the papers of one of FDR’s administrative geniuses, Luther Halsey Gulick III. Panelists will include Susan Dunn, Massachusetts Professor of Humanities at Williams College, David B. Woolner, Senior Fellow and Resident Historian of the Roosevelt Institute, and Kenneth Meier, Distinguished Scholar in Residence, Department of Public Administration and Policy at American University. The discussion will be moderated by Ralph Blumenthal, Distinguished Lecturer at Baruch College.

How Did Ordinary Citizens Become Murderers?

Dr. Christopher Browning, the author of Ordinary Men, and Dr. Wendy Lower, the author of Hitler’s Furies: German Women in the Nazi Killing Fields, will help illuminate one of the Holocaust’s most vexing questions: What prompted average people to commit extraordinary crimes in support of the Nazi cause? 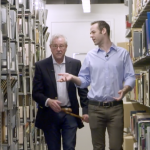 How does the goverment organize itself ‘to the benefit of the people’?
Luther Gulick is not well known, but his legacy in goverment holds a lot of answers. It is all being meticulously archived at Baruch College.